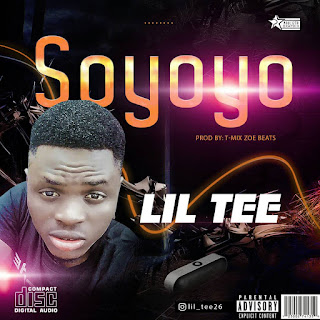 Lil tee was born and brought up in Lagos State where he started music at the age 10 years old but officially started  recording at studios in  2015. This young artiste released a Jam titled WONDER at this early 2017. Lil Tee, the wonder crooner make Alot of waves both on Lagos Island  and even on campus because he reps one of  the great university in Nigeria (UNIVERSITY OF LAGOS) after releasing wonder on March 2017.
His fans are asking for more jams that was why he brought this up to quench their thirst, and it’s called SOYOYO
THIS IS A JAM Y’ALL REALLY NEED TO HEAR.

About Skulboy 1505 Articles
Am Rasak Yusuf C.E.O/Founder Of Naijagrooves, An Online Promoter,Blogger,Artist Manager, He love to brings you the Nigerian latest Music,News and All Informative Messages On This Medium Connect With Me Via: IG:@Naijagrooves Facebook:@Yusuf Rasak Call:08140551709 or Whatsapp: +2348172023383
Website