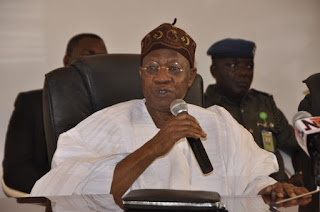 Minister of Information and Culture, Alhaji Lai Mohammed has advised Nigerians against hate speech and warned that such utterances can lead to war.
The minister made this statement during the “Lai Mohammed 10th Annual Ramadan Lecture” held in his country home, Oro, Kwara.
He urged Nigerians to disregard those who were engaged in hate speeches as well as their purveyors.
He said: “In the last couple of months, we have witnessed the increase inflammatory and hate speeches.
“Hate speeches have been responsible for wars. Rwandan genocide where more than 800,000 people were killed was started by hate speeches.
“Like people say, wars are not really started by bullets, they are started by words of mouth.
“Nigeria is too big and God has a purpose for making us one and we shall remain united.
“There will be differences, but like the Yoruba says, “Ori bibe ko ni ogun ori fifo” (beheading is not antidote to headache).
“We have been living together peacefully and we will continue to live together, because we have a lot to gain by being united.
“If there is war today, none of us will escape whether you are young or old whether you are Yoruba, Igbo of Hausa.”
Mohammed made this known on Thursday, June 15, when he appeared on Channels Television show, Politics Today.
According to him, President Buhari made it clear when he was leaving, that the length of his stay would be determined by his doctors.
About Skulboy 1267 Articles
Am Rasak Yusuf C.E.O/Founder Of Naijagrooves, An Online Promoter,Blogger,Artist Manager, He love to brings you the Nigerian latest Music,News and All Informative Messages On This Medium Connect With Me Via: IG:@Naijagrooves Facebook:@Yusuf Rasak Call:08140551709 or Whatsapp: +2348172023383
Website