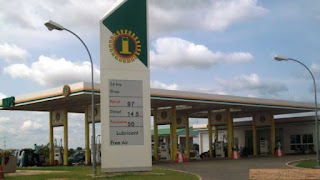 The Nigerian National Petroleum Corporation (NNPC) says it is not involved in the collection of signature bonuses (funds) paid by oil companies to the Federal Government.
The Group Managing Director of the NNPC, Dr Maikanti Baru, said this in a statement released in Abuja on Monday by the Group General Manager, Group Public Affairs Division, Mr Ndu Ughamadu.
Baru said this while shedding light on the role of NNPC in the oil revenue collection process at a hearing of the House of Representatives Ad Hoc Committee on Oil Prospecting Licenses (OPLs) and Oil Mining Leases (OMLs).
Baru, who was represented by the Corporation’s Chief Operating Officer, Upstream, Mr Bello Rabiu, said it was the duty of the Department of Petroleum Resources (DPR), not the NNPC, that was charged with the responsibility of taking receipts of signature bonuses and royalty.
He, however, said the arrangement allowed NNPC to lift the royalty oil from Production Sharing Contracts (PSC) and remit the proceeds to the DPR.
Baru added that confirmation and reconciliation of royalty payments to the sister agency were carried out at the monthly meeting between the Office of the Accountant General of the Federation and revenue generating agencies.
He further assured the Ad-Hoc House Committee that NNPC would furnish it with all pieces of information on its royalty remittances from the PSCs to the DPR from 1992 till date.
The statement quoted the Chairman of the Ad-Hoc Committee, Rep. Gideon Gwani, as saying that the Committee invited all agencies involved in the collection of oil revenues and the Central Bank of Nigeria (CBN) to resolve the claims and counter-claims regarding signature bonuses and other revenues from some OPLs and OMLs.
The News Agency of Nigeria (NAN) recalls that there have been accusations and counter accusations on how the corporation defrauds government of oil revenues.
In this article:
Dr. Maikanti Baru NNPC

About Skulboy 1534 Articles
Am Rasak Yusuf C.E.O/Founder Of Naijagrooves, An Online Promoter,Blogger,Artist Manager, He love to brings you the Nigerian latest Music,News and All Informative Messages On This Medium Connect With Me Via: IG:@Naijagrooves Facebook:@Yusuf Rasak Call:08140551709 or Whatsapp: +2348172023383
Website