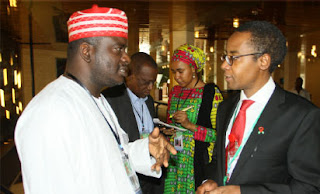 MEETING: From left – National Coordinator, National Youth Network on HIV/AIDS in Nigeria, NYNETHA, Dr. Umar Tanko Yakasai, with the Director General of the National Agency for the Control of AIDS, NACA, Dr. Sani Aliyu, during the third National Council on AIDS held in Abuja, last week.
New research links the two conditions, suggesting that adults with HIV are predisposed to developing diabetes. The list of currently known risk factors for diabetes includes obesity and a lack of physical activity, being 45 years old or above, having a family history of the disease, or having gestational diabetes.
New research, however – published in the journal BMJ Open Diabetes Research & Care – suggests that the list may have to be amended to include HIV infection.
The researchers found that diabetes risk is significantly higher among adults with HIV than in the general population.
Specifically, 1 in 10 adults with HIV had diabetes, half of whom had type 2 diabetes. Overall, after adjusting for all the variables, the diabetes prevalence was 3.8 percent higher among HIV-infected individuals than in the general population.
The authors caution that their study is purely observational, so they cannot draw any conclusions regarding cause and effect.
They also add that given the high efficacy of modern HIV treatment, individuals that are HIV-positive live well into old age, when they become vulnerable to serious illnesses

About Skulboy 1267 Articles
Am Rasak Yusuf C.E.O/Founder Of Naijagrooves, An Online Promoter,Blogger,Artist Manager, He love to brings you the Nigerian latest Music,News and All Informative Messages On This Medium Connect With Me Via: IG:@Naijagrooves Facebook:@Yusuf Rasak Call:08140551709 or Whatsapp: +2348172023383
Website